Diagram 1 shows a position from the game Pinter–Alterman, Beersheba 1991, which had previously been analyzed by the winner, Pinter, in Chess Informant, in Nunn’s Chess Endings, and in Fundamental Chess Endings by Mu?ller und Lamprecht. All these authors conclude that Black could have drawn with correct defense. The goal of this article is to show that Position 1 is already winning for White. In fact White always wins with the white king on d4, the black king on d6 and bishops on white squares, unless of course Black to move can capture the white bishop. (In Diagram 1 the kings will immediately move to d4 and d6, respectively.) 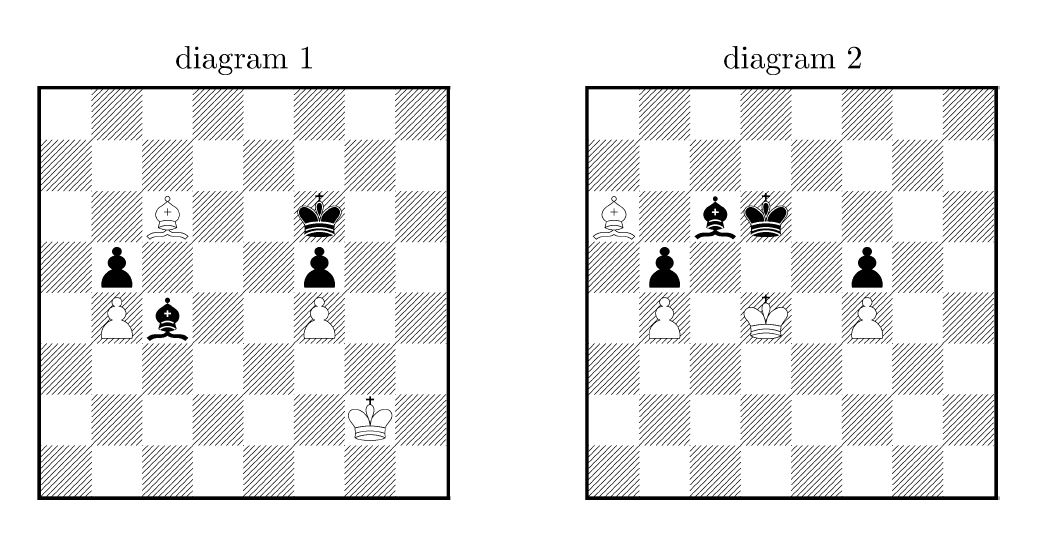 In order to consider the most complex case, we start with Diagram 2, where the white bishop is temporarily trapped in the upper left corner region, and where some effort is needed to set it free. Once this is accomplished, it is clear that White can reach Diagram 3, which is actually a natural starting point for the analysis. If it is Black to move in Diagram 3, then he loses a pawn right away, but at first White can reach this position only with White to move. 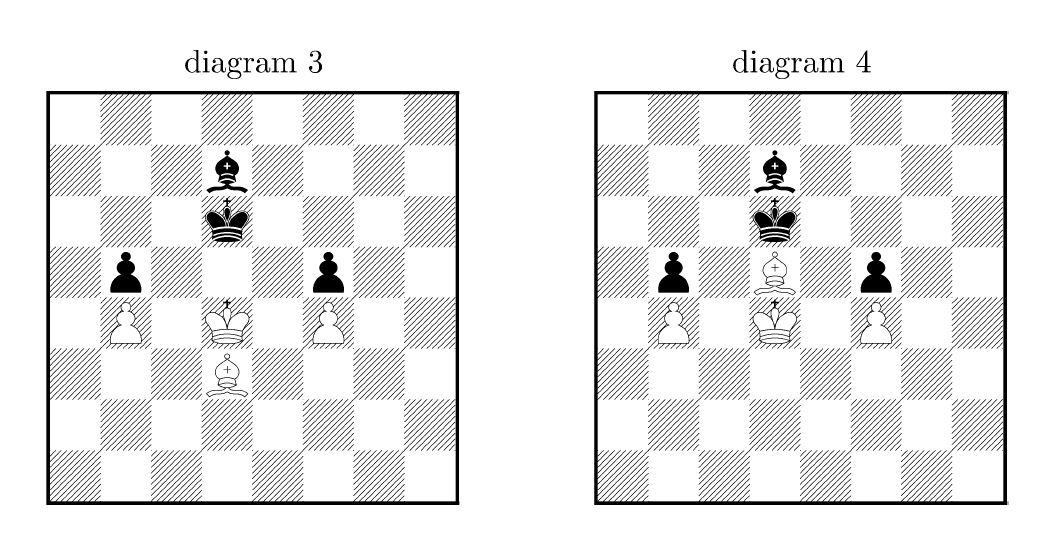 As preceding analysis by Nunn and others shows, White wins if he manages to get his bishop to the central square d5; in this case Black cannot prevent the loss of a pawn, no matter where his bishop is placed. Black’s best defence is to answer the move Bd5 by Bd7, reaching Diagram 4. In the game Alterman resigned when the loss of a pawn was imminent, and Nunn says nothing as to how White should go about realizing the extra pawn. Indeed, at this point it is justified to assess the game as won for White on general grounds; after all, the pawns are sufficiently far apart, and Black’s remaining pawn is still blocked on a white square. Even so, it seems that the win is still not entirely trivial and that it is worthwhile investigating how play may continue. (Of course, this ending is also covered by the recently constructed tablebase for seven-piece endgames.) 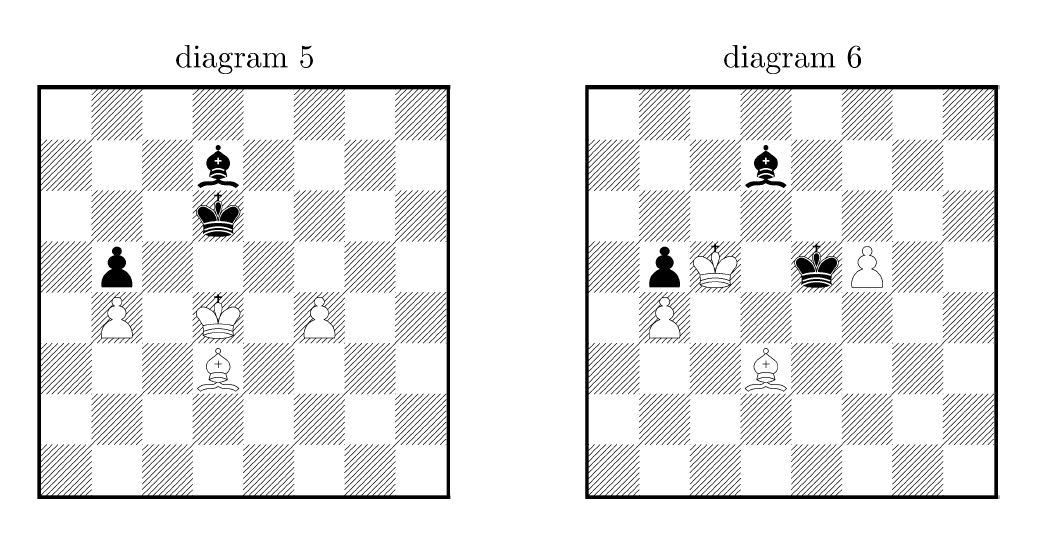 Consider Diagram 5. (If Black gives up the Pb5 rather than Pf5, the winning procedure is similar.) We will describe a winning method which is certainly not the only one but absolutely reliable. White starts with the move f5, then moves the king towards g5 and threatens to support the passed pawn. This forces the black king to move in front of the Pf5, allowing White to break through to the pawn b5 and reach a position akin to Diagram 6. Here White still has to work a little bit, since 1. B×b5? B×f5 does not win. However, after an appropriate preparation a pawn exchange does win. As a matter of fact, the main variation starting from Diagram 2 does not lead to Diagram 6, but to a related position which is reached from Diagram 6 after the moves 1. Bc2 Be8 2. Bb1 Bd7 3. Bd3 Kf6 4. Kd5 Ke7
5. Be4.

The preceding discussion indicates that the winning procedure in Position 2 consists of the following five stages:

Stage 1: White gets the bishop out of the upper left corner region and reaches Position 3, first with White to move.
Stage 2: White gets the bishop to the central square d5. (This is the intermediate goal which, according to earlier authors, White is unable to accomplish.)
Stage 3: White forces the win of a pawn, typically after reaching Position 3 with Black to move.
Stage 4: After winning the Pf5, White makes a bypass manoevre, threatening to support the passed pawn, and thus forces a breakthrough to the Pb5.
Stage 5: White exchanges the Pf5 for Black’s Pb5 such that a winning ending B+P v. B is reached.

Stage 3 is dealt with in detail by previous authors, and there is no need to repeat their analysis; we will give only one main line for this part of the winning procedure. Stages 1 and 4 are fairly straightforward, and may be dealt with without considering many different lines; it is not hard to establish that White can always achieve the respective intermediate goals. Although Stage 5 is no particularly complicated either, it is slightly tricky and involves the kind of play where concrete and precise analysis is called for.

Not surprisingly, the central part of our analysis concerns Stage 2. As noted, previous authors claim that White cannot achieve the specified intermediate goal, so what about it? Nunn writes:

You will often find attempts in endgame books to analyse such positions based on the kind of corresponding-squares analysis we saw in [ . . . ]. In this type of analysis, the various positions of the bishops are examined to see which form reciprocal zugzwangs. The trouble with this method is that play is often not restricted to bishop manoeuvres; for example, in [ . . . ] a triangulation by the
whithe king played a crucial role in one line and without this White would not be able to win. Therefore the assumption that king manoeuvres will play no part may not be justified and can give rise to incorrect conclusions.

With this remark Nunn refers to his analysis of Stage 3, but, as it turns out, it also provides the hint for Stage 2! For this stage earlier analysis did not consider a temporary retreat of the white king, but with bishop manoeuvres alone White is indeed unable to achieve his goal. We note in passing that king manoevres occur in each of the five stages, but Stages 2 and 3 are the only ones where this is not obvious in the first place.

At first glance it may seem surprising that a temporary king retreat is the key to White’s success during Stage 2. Given that bishop manoeuvres are not sufficient, it may appear that Black can defend himself by the following strategy:

However, this defence strategy fails for a subtle reason. The point is that whenever the black king moves to a white square, it causes some damage to the defence: sometimes the black bishop is obstructed, and sometimes the black king is exposed to a bishop check, which may likewise upset the balance. On the other hand, if the black king only moves on black squares, then he can return to d6 only in an even number of moves, and this allows White to apply triangulation.

In spite of the above remark by Nunn, we feel that it makes sense to consider corresponding squares in this ending, as applicable for Stage 2. Of course, the meaning of corresponding squares has to be defined appropriately; they are characterized as follows. Suppose that the white king is on d4, the black king on d6, the white bishop on a square X, and it is White to move. Then the following assertions hold:

Trivially, d7 is the only square corresponding to d3. Next, assume that the white bishop is on g2. In order to keep it from d5, the black bishop must be on the diagonal a2–g8, but if it is not standing on f7, then White can win a pawn immediately. For instance, with the black bishop on c4 there follows 1. Bh3 Be6 2. Bf1 Bd7 3. Bd3.

With the white bishop on f3, c4 is clearly the only square where the black bishop covers d5, is ready to answer Bg2 by Bf7, and where it prevents the move Be2. If the black bishop were on a2, b3, e6 or g8, then 1. Be2 would win a pawn right away.

Let us now turn to a detailed analysis of the ending, starting from diagram 2.

At this point White can make only make progress by means of a king manoevre, of course, since the bishop can only return to a6. The idea is simple: by making a little round tour and returning to d4 in an odd number of moves (namely five), White passes the move to Black, assuming that the black king moves between d6 and e7 so as to keep the white bishop trapped in the upper left region. At move 4 Black will also have the option of moving the king to d5, threatening to penetrate White’s camp, but here, too, he will be forced back to d6 immediately. Otherwise every other move by Black allows the white bishop to get free more quickly. At the moment Black cannot play 2. . . . Kd5?, of course, since the resulting pawn ending would be lost immediately (3. Bb7+ Kc4 4. B×e4 f×e4 5. f5 Kd5 6. f6 Ke6 7. K×e4 K×f6 8. Kd5).

Now position 3 has been reached. At this point we regard Stage 1 as finished, although the white bishop actually got free four moves ago.

It was shown above that e8 is the only square corresponding to f1, and how White gets through Stage 2 after 11. . . . Bc6. Now a suitable moment has arrived for White to apply a king manoevre in the rear.

All things considered, this is the most tenacious defence for Black. There are numerous alternatives, but they all prove insufficient:

White takes advantage of the fact that the black bishop cannot move to the corresponding square c6.

This is now the only move which requires further consideration. In every other case there follows 14. Kd4, and after 14. . . . Kd6 the black bishop would be on the wrong square. Now, however, Black would be fine after 14. Kd4?! Bc6.

Now White tries to apply triangulation, taking advantage of the fact that the black king has already returned to d6 in two moves. After 14. . . . Bc6 15. Kd4 or 14. . . . Kc6 15. Kd4 Kd6 the goal has been achieved: the black bishop has left or must leave the corresponding square.

We have reached diagram 4, so Stage 3 of the winning process begins. As noted earlier, this stage was analyzed in detail by previous authors, so we only show one main line.

The end of Stage 3 is reached, and Black cannot keep his pawns any longer. We only consider a line where Black gives up the pawn 5, for in the other case the winning procedure is similar.

Now Black has reached the best defensive setup against the current arrangement of White’s pieces. White has to pass the move to Black by means of triangulation with the bishop.

No further analysis is needed: by pushing the pawn White wins without any further problem.